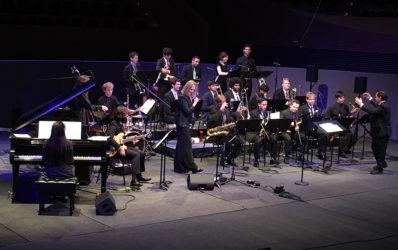 INGRID JENSEN
Born in Vancouver and raised in Nanaimo, British Columbia, Ingrid Jensen has been hailed as one of the most gifted trumpeters of her generation. After graduating from Berklee College of Music in 1989, she went on to record three highly acclaimed CDs for the ENJA record label, soon becoming one of the most in-demand trumpet players on the global jazz scene.
After a teaching stint in Europe in her early twenties – as the youngest professor in the history of the Bruckner Conservatory in Linz, Austria – Ingrid settled in New York City in the mid-1990s where she joined the innovative jazz orchestras of Maria Schneider (1994-2012) and Darcy James Argue (2002-present). More recently, Ingrid has been performing with the Grammy-winning Terri-Lyne Carrington and her Mosaic Project and the highly acclaimed all-star ensemble, Artemis.
Ingrid is a featured soloist on the Christine Jensen Jazz Orchestra’s Juno-award-winning album, Treelines (2011), and its successor, Habitat (2013). She has performed with a multi-generational cast of jazz legends ranging from Clark Terry to Esperanza Spalding; Ingrid has also performed alongside British R&B artist Corrine Bailey Rae on Saturday Night Live, and recorded with Canadian pop icon Sarah McLachlan. In addition to her busy sideman and featured soloist schedule, Jensen leads her own quintet, quartet and
organ trio. Her own bands have garnered glowing reviews and earned her a loyal fan base around the globe.
She plays a custom Monette trumpet, built personally by the master builder Dave Monette.

STANFORD JAZZ ORCHESTRA
The Stanford Jazz Orchestra is among the leading collegiate jazz ensembles in the United States and is dedicated to the preservation and performance of the art form of large ensemble jazz.
Founded in 1990 under then director Fredrick Berry, the group embarked on numerous European tours that culminated in performances at the Umbria and Montreux Jazz Festivals, as well as Jazz à Vienne.
Under the direction of Michael Galisatus, the Stanford Jazz Orchestra has most recently performed with such artists as Wycliffe Gordon, Jon Faddis, Ingrid Jensen, Carl Allen, Alan Pasqua, Kenny Washington, Alan Ferber, Jamie Davis, and Clairdee. We are excited to have the great Ingrid Jensen returning with us for this tour.
Members of the ensemble are drawn from both the graduate and undergraduate populations at Stanford University and represent a broad diversity of academic disciplines. Alumni of the ensemble have become leaders in the fields of technology, medicine, the sciences, mathematics, and the arts both in the United States and abroad.
Michael Galisatus is Professor of Music and Director of Bands at the College of San Mateo, directing both the college big bands and the wind ensemble. Prior to his appointment at the College of San Mateo, Mr. Galisatus produced award winning ensembles at various San Francisco Peninsula schools including Aragon, El Camino, and South San Francisco High Schools, and directed jazz ensembles at San Francisco State University and
The College of Notre Dame.
Mr. Galisatus is in demand as a guest conductor and clinician throughout the western United States, including organizations such as the Monterey Jazz Festival, the Stanford Jazz Workshop, California Alliance for Jazz, and a host of others. In addition, Mr. Galisatus has presented workshops abroad, including Japan, China, Norway, Mexico, and Canada.
He has been the recipient of various teaching honors including the California Music Educators Association (CMEA) Jazz Educator of the year, The CMEA Bay Section Outstanding Jazz Educator Award, The Peninsula Arts Council Arts Educator of the Year, the Otter Distributors 2004 Jazz Educator Award for the state of California, the California PTA Honorary Service Award, and the CMEA Bay Section Gil Freitas Memorial Award for music education.
As a freelance trumpeter in the San Francisco Bay Area, Michael has studied under William Adam (Indiana University), John Coppola (Stan Kenton, Woody Herman), Joe Alessi (SFSU), and Chris Bogios (SF Symphony). Mr. Galisatus has recorded with Pete Escovedo, and Queen Ida, and has performed with a variety of artists including Tito Puente, Sheila E., Louis Bellson, Kenny Washington, Paula West, Natalie Cole, Johnny Mathis, Michael Feinstein, Mel Tormé, The Temptations, The Four Tops, The O’Jays, and many others.