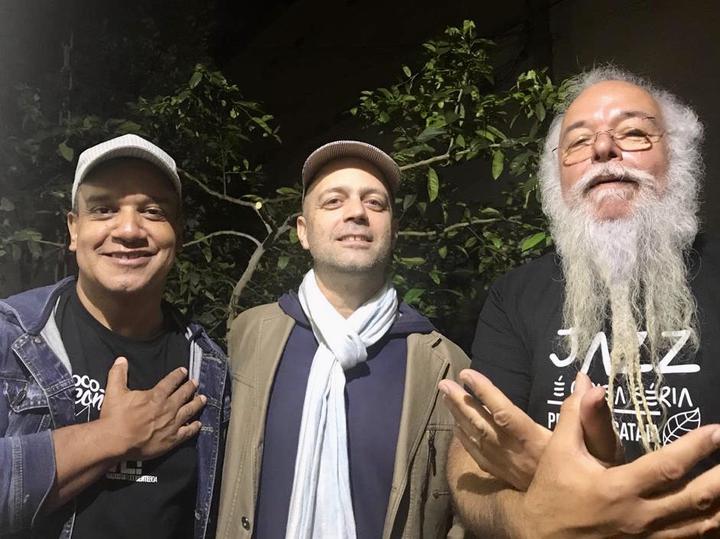 CATAIA is a native plant in the Atlantic forest, specially from Ribeira valley in the south coast of Sao Paulo state. Its leaf is used to prepare a very popular drink in the region, and when submerged in “cachaça” (a sugar cane brandy) its acidity is reduced, making it a kind of homemade whisky.

This new Arismar do Espírito Santo´s work pays tribute to the coast culture of Sao Paulo and Paraná, bringing compositions marked by melodies of easy assimilation. During the concert the audience interacts with the music in such a way they will trace, by means of several rhytms and improvisations, the development of the leaf to the tea. The show is made with the special partnership of national references, regarding their instruments : Glauco Sölter on the bass guitar and Mauro Martins on the drums. The project may also include musical experiences with the trio, a colective jam and an open rehersal.

Arismar do Espírito Santo, a renowned name in the music scene, a reference in several instruments, is considered a complete musician. Creativity and way of playing and composing, under the maximum force of intuition and spontaneity, are his trademark. He has signed and directed several projects and performed shows and masterclasses in several cities and countries. He has thirteen CDs released, eight with his compositions, and two edited books: Arismar Songbook (Ed Passarim) and Caderno Acre (FUNARTE Music Award), which reports on Musical Creation work carried out in the State of Acre. Arismar is an owner partner of the company Arieni Cultural Promotion of Events, responsible for numerous musical projects involving concerts, workshops, masterclasses, production of CDs and books.

Glauco Sölter is a bass player born in Cascavel (PR), based in Curitiba and currently living (also) in São Paulo. He plays and records regularly with different works in Brazil and abroad. He has been accompanying the great trombonist Raul de Souza for over 15 years. He has his authorial work with 5 CDs released, besides being part of the groups “Mano a Mano Trio”, “Duo Bandolaxo” and “Projeto Cataia” (with Arismar do Espírito Santo). He has worked with names like João Bosco, João Donato, Ron Carter, Badi Assad, Richard Bona, Toninho Horta, among others. He attended Berklee College of Music in 1999. Before that, he had played with his trio at the Montreux Jazz Festival and released a CD nationally with instrumental music group NaTocaia. He also works regularly as a teacher, arranger and cultural producer. He has just launched the book Levadas Brasileiras, about the history of bass in Brazil.

Mauro Martins is a brazilian bass player, drummer and producer from Curitiba/Brazil. He grew up in a musical family playing percussion and guitar with his older brothers. He switched to the eletric bass at the age of sixteen and would soonbe playing with several bands in his hometowtn. On december 1989 he was invited to play in Swiss and he decided to settle down in Europe, where he has been working ever since on several music projects as well in more than 130 studio productions. He appeared in major festivals and music clubs in Europe, Asia, Africa and Brasil and also colaborated with outstanding artists such as Phil Collins, Airto Moreira, Larry Coryell, Luís Eça, Toninho Horta, Tânia Maria, Sebastião Tapajós, Raul de Souza, Chico César, Rosinha de Valença, among many others. (Pressetext)