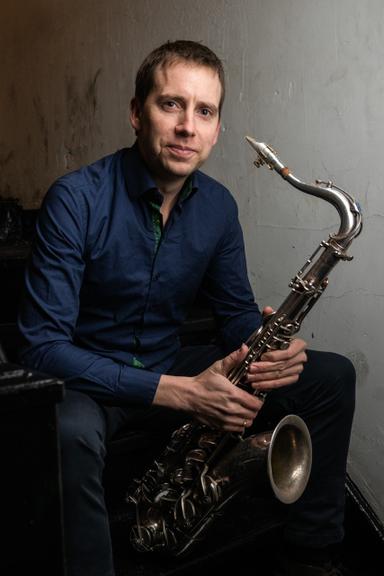 On tour, Austrian saxophonist Bernhard Wiesinger (b. 1981), based in Vienna, presents his debut album Notice That Moment, recorded with Kevin Hays, Scott Colley and Bill Stewart in New York in 2019.

Wiesinger combines authenticity in his playing and individuality in his sound, smoothly mixing tradition and modernism in a serenely natural style. These attributes are reflected also in his choice of tracks, consisting of his own compositions, self-arranged jazz standards and songs from the legendary motown era. Notice That Moment displays Wiesinger‘s ability both as an innovative composer and an excellent instrumentalist. He has collaborated with numerous prestigious national and international artists, such as Lori Williams, Harry Sokal, Fritz Pauer, Joris Dudli, Christian Havel, Jon Davis, John DiMartino, Renato Chicco and Juraj Bartos. Wiesinger has established himself as one of the most sought-after saxophone players in the Austrian jazz-scene.
Outstanding pianist and grammy-winner Dave Kikoski will provide the New York-feeling at the concert. He has been living in the capital of jazz for decades and has played with jazz legends as Michael Brecker, John Scofield, Mike Stern and Roy Haynes.
Serbian bassist Milan Nikolic and Austrian drummer Christian Salfellner build the rhythmic backbone of the band.

They have both accompanied numerous international musicians, including Benny Golson, Peter Bernstein, Vincent Herring, Art Farmer, Seamus Blake, Jerry Bergonzi. A great band, which spreads their joy of playing and plays on the highest musical terrain.