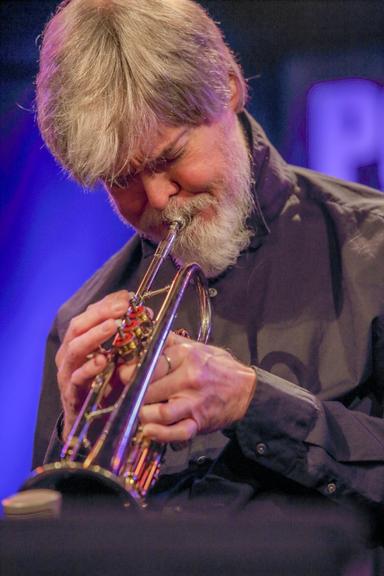 “Plenty of improvisers are specialists in now-ness, revealing a solo as a series of events, or present-tense flashes. With Mr. Harrell, it’s all one event. He’s always processing ahead and behind, and you feel as if you’re hearing the whole of the narrative at all times, from ‘was’ to ‘is’ to ‘will be.’ – The New York Times

Trumpet genius Tom Harrell is a singular voice in contemporary jazz who has been named “trumpeter of the year” numerous times by DownBeat magazine and the Jazz Journalists Association, won multiple Grammy Awards, and recorded on over 260 albums. He’s played with a long list of greats including Woody Herman, Art Farmer, Horace Silver, Stan Kenton, Lee Konitz, and Bill Evans. His compositions have been performed by artists like Hank Jones, Arturo O’Farrill’s Afro-Latin Jazz Orchestra, Ron Carter, and Chris Potter. He’s even worked as an arranger for Vince Guaraldi’s Peanuts, Carlos Santana, and many more. In his return to Dizzy’s Club, following a recent string of sold-out performances, Harrell brings the same band featured on his outstanding 2019 album, Infinity. Drawing from a huge variety of influences, Harrell once again offers a mesmerizing take on modern jazz.