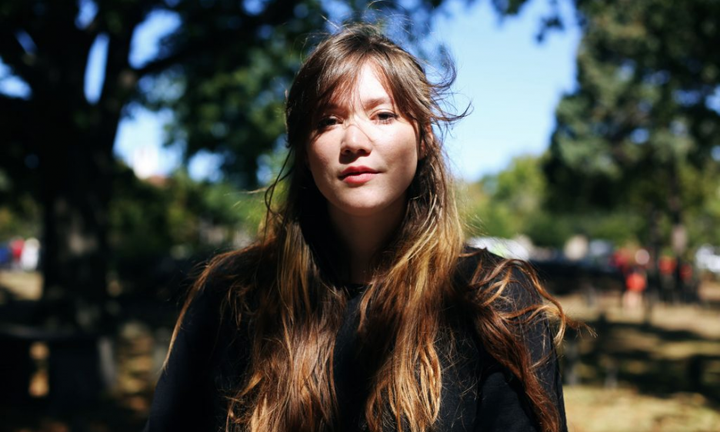 Circles, angles, arcs, lines, intersections, Wendy Eisenberg is an explorer, inventor, author, observer, reporter, and much more. On the vanguard of the new new school, where teacher and student are irrelevant distinctions, Wendy has smelted these fine alloys for you; to build a skyscraper with a new type of scaffold. (Matt Pike, Founder of HEC Tapes)

She seems to balance on a polarity between the abstract and the pragmatic, referencing geometric lines, the neat collision of mathematics, and coyly teasing out an equation that we’ve yet to see (or understand) in full. And with that air of mystery, there’s intrigue. (Kelly Kirwan, ThrdCoast)

“If it is not beautiful for someone, it does not exist” (William Gaddis)

Wendy Eisenberg is an improvising guitarist, banjo-player, vocalist and poet. Using the languages of free jazz, new music, metal and art song, her music challenges the representational and technical demands placed on a guitar and a banjo in contemporary music.

She has two solo careers: improviser/composer, and songwriter. Wendy’s debut record as an improviser, “Its Shape Is Your Touch,” came out in October 2018. Her trio, “The Machinic Unconscious,” with Ches Smith and Trevor Dunn, released their debut album on Tzadik that same months. Both records made Billboard’s Critic’s Choice Top Ten Jazz Records year end list, and received features and attention from NPR and National Sawdust. Her album of quiet art-pop songs, Time Machine was remastered and re-released on Feeding Tube records on September 7th, 2018.

In addition to her work as a solo artist, she has written and performed in numerous projects, including the critically acclaimed experimental band Birthing Hips, described by NPR as “brainy, noisy punk based in sonic adventure, technical mastery, and rejection of the status quo.” She leads a rock trio, Editrix, which explores similar parameters.

Her work as an improviser has led her to collaborate with Matt Mitchell, Trevor Dunn, Ches Smith, Ted Reichman, Joe Morris, Damon Smith, Shane Parrish and Zach Rowden, among many others. She has premiered work by John Zorn, Matt Mitchell, Ted Reichman, Maria Schneider, and Marta Tiesenga, as well as works by her many peers, and has premiered her own work at The Stone, The New School, the Hartt School of Music, New England Conservatory, Yale, and Hampshire College.

Wendy has provided soundtrack work for the scientific projects of MIT Media Lab fellow and scientist-artist Ani Liu. Her poetry has been set into two large scale works by Matt Curlee, premiered at the Eastman School of Music in 2014 and one awaiting its premier featuring percussionist Michael Burritt. Her writings on music can be found in John Zorn’s Arcana VIII: Musicians on Music, and in the forthcoming edition of the Contemporary Music Review.