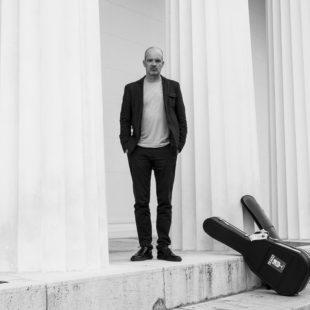 Mario Rom is an Austrian trumpet-player born in 1990. After having received trumpet lessons from a very early age on he studied classical music in Vienna and in Linz while having lessons with the likes of Ralph Alessi, Ellery Eskelin and Laurie Frink. In 2011 he joined Arian Mears’ Generations Unit and founded his own trio Interzone which he has released three albums with to this date. He is also a member of Lukas Kranzelbinder’s septet Shake Stew which is said to be one of the most important groups in today’s Austrian scene. Furthermore he is working with Dave Liebmann, Luis Bonilla and Andrej Prozorov and recorded with Fiva, Lia Pale and Harry Pepl. Touring led him through Germany, Morocco, Mexico, China, Israel and Northamerica. Starting in his teens, he has won several national and International prices and awards. This is his first collaboration with Wolfgang Muthspiel.

Colin Vallon - after studying classical music for 2 years Colin Vallon (born November 17 1980 in Lausanne) switched to jazz and founded his trio in 1999. With his use and development of his own prepared piano techniques he opened the Swiss Diagonales Festival with New-York guitarist Kurt Rosenwinkel. 2005 saw him form a new trio with Patrice Moret on double-bass and Samuel Rohrer on drums. The third recording of the trio was released in 2011 on the prestigious international Label ECM Records. In 2012 drummer Julian Sartorius replaceed Rohrer in the trio. In 2014 the trio released «Le Ven» followed by «Danse» (2017) both albums are released on ECM Records. The trio is very active on the international jazz scene. Numerous concerts at international festivals (Wilisau, Paris, Vienne, Rome, London, Portland, Montreal, …) and tours in Europe, Canada, USA, Japan, South Corea, … Colin Vallon is also active as a composer. 2014 he wrote the music for «Hallo» a the choreographical piece by Martin Zimmermann. During the same year he took part in the creation of the documentary film «Gossenreiter». Colin Vallon won numerous prices and competions throughout his career and founded a quintet «Colin Vallon cinq» with french trumpet player Erik Truffaz. Since 2009 he is teaching at the Bern University of the Arts and is also playing with the Elina Duni Quartet and Nicolas Masson. Colin Vallon recorded with Tom Harell, Adrian Mears, Andy Scherrer, Steffen Schorn, John Schröder, Tyshawn Sorey, Dejan Terzic, Nils Wogram, Kenny Wheeler and many more.

Wolfgang Muthspiel is an Austrian guitarist and composer. Born in Judenburg in 1965, he lived and worked in the U.S.A. for an extended period of time before returning to settle in his native country at the beginning of the millennium. His work as a band and co-leader is documented on over 30 CDs, for most of which he composed pieces and which continually exhibit an impressive line-up; from Brad Mehldau, Brian Blade, John Patitucci, Bob Berg, Gary Burton, Dave Liebmann, Paul Motian, Tom Harrell and Trilok Gurtu, he always gathers the who-is-who of contemporary jazz for his recordings and his tours. He is also skilled at discovering big talents and, as a result, he has headed the Jazz Guitar Department at the Hochschule für Musik Basel since 2002 and founded project Focus Year there in 2017, which is a worldwide novelty. His highly and critically acclaimed releases on ECM Records and his own label Material Records have brought him a reputation of being one of the most influential guitarists of his generation as well as numerous rankings in global best-of-lists. Muthspiel's latest release “Rising Grace” assembled Ambrose Akinmusire, Brad Mehldau, Larry Grenadier, and Brian Blade on one album and once more impressively demonstrated his mastery and creative musicality which goes beyond the boundaries of genres. Consequently, the album was treated by many as the best Jazz album of 2016 and multiple sold-out concerts followed worldwide. In his compositions and improvisations, Muthspiel combines European and American musical traditions at the highest level. (Pressetext)