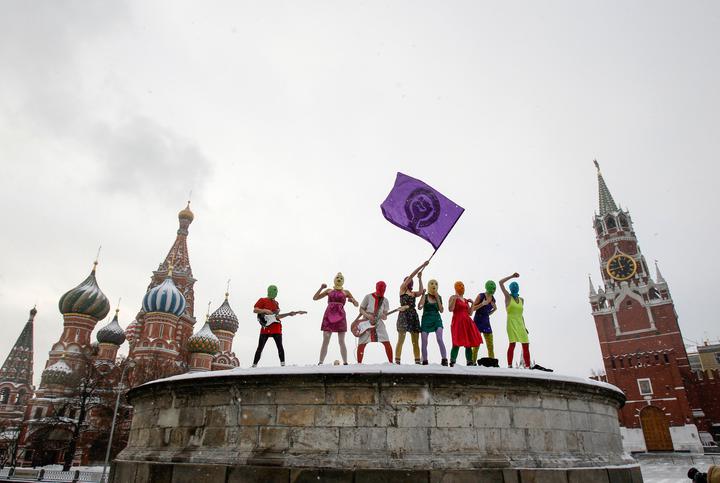 She dressed up as a food courier to get around the Moscow police, who had her under house arrest, and left Russia. Maria Alyokhina, better known as Masha, picked up the phone somewhere in Iceland to talk to EL PAÍS via the encrypted network Telegram. Alyokhina, a member of the Pussy Riot collective, the punk band that has been defying Vladimir Putin’s government since 2011, was afraid that Russian authorities might track her down. “I was arrested three days after the war with Ukraine started. I was in a labor camp again. When I was released, my friends had either left Russia or were in jail. Everything here is always that complicated and stupid,” she said. “They took away my passport. I am here thanks to the solidarity of other artists who helped me escape from Russia. Pussy Riot exists because of that solidarity, with which we will build something stronger than weapons.”

For this 33-year-old native of Moscow, nothing has been the same since August 17, 2012, when Pussy Riot burst into the Cathedral of Christ the Savior in Moscow wearing colorful balaclavas to ask the Mother of God to rid the world of Putin. The punk performance turned into the most effective act of activism against the Russian government to date, it upset Putin and also, she says, the West, “which continued to sell arms to Russia, and buy gas from it, without asking what was happening to the human rights of Russians. Suddenly, with Ukraine, it’s like they’ve opened their eyes. And they are doing things. What’s most effective is the gas embargo, and the embargo on the properties of oligarchs. They should be tougher there,” she said.

Following that 2012 performance, she was sentenced to two years in prison for hooliganism, her longest jail term, and released in December 2013. Alyokhina describes her time in prison as a gulag in which she did forced labor “for 12 hours a day.” She would later be arrested on numerous occasions for her activism. In April, after protesting against the Kremlin’s offensive in Ukraine, a court replaced her house arrest with 21 days in a penal colony.

The call gets cut off. Does she think the line is tapped? “I don’t know and I don’t care. Putin doesn’t scare me. He’s a nobody. He’s just a guy who has held the presidency in Russia and built a totalitarian state pretending to be a new Stalin fighting the Nazis. He is not dangerous. The things he has at his disposal are dangerous. The atomic bombs, the missiles. But he himself is nobody. He has done nothing but ruin the country. In 22 years, he has built nothing. And the rest of the world knows it. And if you spend enough time in Russia and see how it works from the inside, you realize that there is nothing more stupid. That’s why you’re not afraid of him. Nobody is afraid of him anymore, it’s ridiculous,” she replied.

What is scary is what is happening in Ukraine, she said. That’s why Pussy Riot are risking going on tour.

Alyokhina spent over a week trying to cross into Belarus and then into Lithuania. Before her escape, she had been waiting to serve one of her countless sentences for her activism against the government. As she told The New York Times, border guards in Belarus held her for six hours on her first attempt to cross the border before sending her back to Russia. On the third attempt she made it, and once inside the country she was given a travel document that facilitated her arrival in a European Union country thanks to the mediation of the Icelandic artist Ragnar Kjartansson.

Their show, Riot Days, will allow fans to decide the price they pay for the tickets. The idea is to continue “opening eyes” to the world about what Putin, “that sick maniac,” is doing in Russia and Ukraine. “He is losing more than he thought he could ever lose. But because he is a maniac he is unpredictable. And that’s why this new Cold War is so dangerous. It’s much more serious and dangerous than the first one. Because Putin is crazy,” she said.

The show is a theatrical adaptation of Riot Days, the book in which Alyokhina denounced the mistreatment of women in Russian prisons. She said that feminism is making inroads all over the world except in Russia. “Russia is dystopian. It doesn’t even have a law against male violence. If I punch you in the street, I’m sure I’ll end up in jail. But if your husband hits you at home, he will be fined €50 and that’s it. And if you are raped, it will be your fault for dressing the way you did. Feminism, even as a word, is an enemy of the state in Russia. It is associated with the West, and with Evil,” she said.

Since arriving in Iceland, Alyokhina has kept up her activism, demonstrating in front of the Russian consulate in Reykjavik and using the network of artist solidarity to host other people who want to leave Russia. She described this experience as a stopover, and said her goal is to return to her country and continue fighting against President Putin through combative art. (LAURA FERNÁNDEZ)