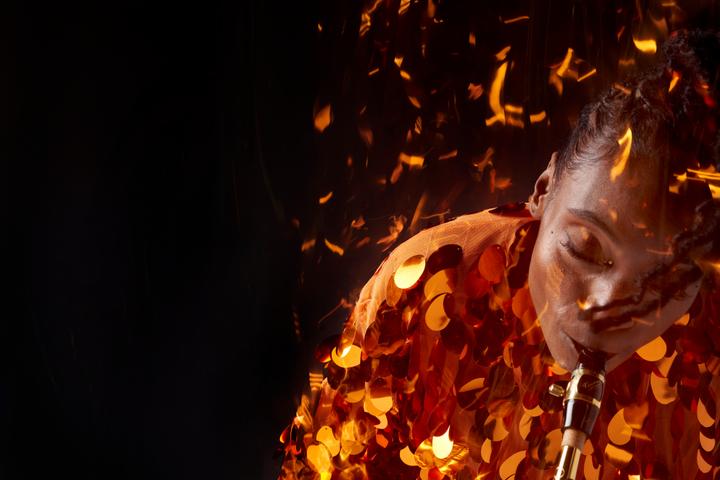 Maybe it's the nuances she's picked up sharing stages with Rashied Ali, Stevie Wonder and Alicia Keys, or a deep intuition not only into jazz, but also into James Brown and Sly and the Family Stone. Perhaps it's her Washington Heights sidewalk sense that, no matter the game, you play and play alike. Or that you learn from the past only by rethinking its effects on the future. These are just some of the questions possibly worth pondering during the hypnotic passages of Pursuance: The Coltranes, saxophonist Lakecia Benjamin's entrancing tribute to Alice Coltrane and, as she learned the history of the music's great couple, her husband, John Coltrane.

Conventionally, and mostly for the growingly archaic patriarchal thought patterns we are quickly (though in some cases begrudgingly) losing grip on, we hear the names reversed: John and Alice. But Benjamin heard Alice first in college, so of course she worked backwards to move us forward on Pursuance: The Coltranes. From John's "Liberia" with it's Benjamin and Gary Bartz blow-down to the free-jam closer, Alice's "Affinity" featuring Coltrane family associate Reggie Workman on bass and Greg Osby on alto, the album is a deep, sweet listen on every level. In performance and concept, Benjamin brings us not only the music of the masters, but also her own. And that's pretty ballsy.

So too is the distinct R&B-ness of "Prema," a searching, contemplation found originally on Alice's 1977 double disc, live triumph Transfiguration (Sepia Tone) and John's "Central Park West" from Coltrane's Sound (Atlantic, 1964). Benjamin keens and careens with a stunning audacity and authenticity, active and strong. Add the smooth street scat of Jazzmeia Horn and what else would you want? "Walk With Me" is a wild ride of today's post bop, as violinist Regina Carter chases Benjamin, Benjamin hotly pursues Carter, and pianist Surya Botofasnia adds the spaciness. With Ron Carter holding the bass chair as he has for thousands of recordings, "Syreeta's Song Flute" daringly embraces the original then lets fly with a serious groove floating along on David Bryant's Fender Rhodes. Cinematically, "Going Home" welcomes you to its vastness as harpist Brandee Younger gracefully acknowledges mere hints of "When You Wish Upon a Star" and Marcus Strickland's bass clarinet adds the anthemic.

Three hundred and eighty five words into this review and we're only halfway through the album. On "Spiral" Benjamin mixes it up with fellow alto Steve Wilson over a Caribbean Marcus Gilmore beat. "Om Shanti," "Alabama," and "Acknowledgment," righteously follow, and from here on out all you need to know is that jazz's future is in sure, firm, and confident hands.