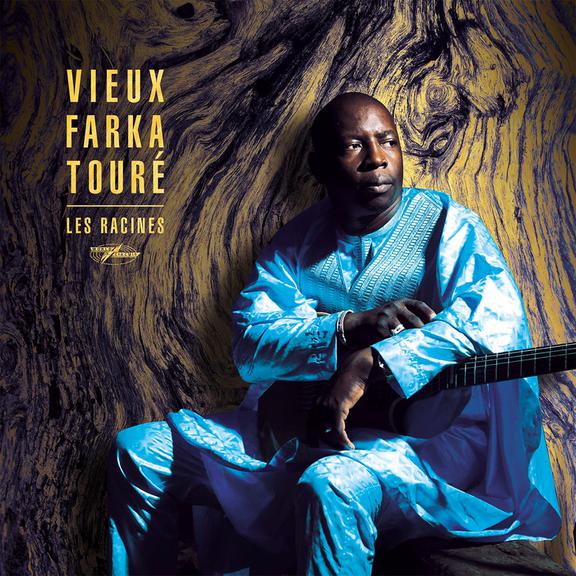 There’s a popular proverb in Mali that says life’s family name is change. It’s a dictum that Vieux Farka Touré has followed throughout his career over a series of adventurous cross-border explorations and collaborations. Yet there’s another more universal adage that says to know where you’re going, you must know where you’ve come from. It’s that essential human need to embrace one’s heritage that lies at the heart of Les Racines.

The title, which translates as ‘the roots’, says it all, for the album represents a deep reconnection with the traditional Songhai music of northern Mali, one of the northern West African musical traditions known in the West by the catch-all term ‘Desert Blues’. And Vieux’s roots run deeper than deep. The son of the late Ali Farka Touré, acclaimed as the finest guitarist Africa has ever produced, Vieux spent two years making Les Racines but the album had been gestating in his mind even longer. “I’ve had a desire to do a more traditional album for a long, long time. It’s important to me and to Malian people that we stay connected to our roots and our history,” Vieux explains. The lockdowns caused by the Coronavirus outbreak, which prevented him from touring, were turned to his advantage as he used the time to craft the most profound statement of his career to date.

Les Racines is Vieux’s sixth solo album in a recording career that began in 2006 and which has taken in audacious collaborations with the likes of Dave Matthews and the jazz guitarist John Scofield, an album with the American singer-songwriter Julia Easterlin, and two records with the Israeli artist Idan Raichel as The Touré-Raichel Collective.
“Early in my career people asked why I wasn’t just following my father. But it was important for me to establish my own identity,” Vieux says. “Now people know what I can do, I can return to those roots with pride and I hope a certain authority.”

Recorded in Bamako in Vieux’s home studio (named Studio Ali Farka Touré in his father’s honour), the timeless grooves of the album are steeped in the traditional music of West Africa. But the fire of Vieux’s guitar playing and the urgency of the messages in his songs add an entirely contemporary relevance. “We are nothing if we abandon respect for the past,” Vieux notes. “But we can also marry modernity with the strength of our traditions.”
In some ways Les Racines is a son’s loving tribute to Ali Farka Touré, who died in 2006 and whose name is invoked in the album’s closing track “Ndjehene Direne”. Yet it is so much more than that, for Les Racines marks out Vieux as the great man’s rightful heir and a major artist in his own right. “It’s difficult to be the child of someone who has gone to the top of the mountain. The name follows you around and it means you have twice as much work to do to establish yourself,” he says. “The album is an homage to my father but, just as importantly, to everything he represented and stood for.”

Born in 1981 in Niafunke, Mali, a dusty town on the River Niger about 100 miles south of Timbuktu, Vieux was discouraged by his father from following in his footsteps. Fortunately he ignored paternal advice and took up the guitar, practicing in secret when his father was out of hearing. He may have been self-taught but clearly Vieux inherited something in his DNA. Eric Herman, now his manager and who co-produced Les Racines with Vieux, recalls hearing him play for the first time at the Touré household in 2003. Convinced that it was Ali playing, when he entered the room he was shocked to discover that it was Vieux. It was the first anybody knew he could play and yet Vieux already sounded like a master. His self-titled debut album appeared in 2006, and came with Ali’s stamp of approval in the form of a guest appearance, his final recordings before he died. Vieux followed with Fondo (2009); The Secret (2011); Mon Pays (2013) and Samba (2017), extending the boundaries of traditional West African music into new and uncharted territory and earning himself the nickname “the Hendrix of the Sahara”. Touring tirelessly, Vieux also became a popular fixture at prestigious venues and festivals around the world, and performed alongside Shakira and Alicia Keys at the opening ceremony of the 2010 FIFA World Cup in South Africa.

Fittingly, Les Racines represents a full circle in more ways than one, for it’s also Vieux’s debut album on World Circuit, the label for which Ali Farka Touré recorded from 1988 until his death. It was, he admits, a long-held “dream” to be on the same label as his father, whose World Circuit recordings won three Grammy awards. The album was mixed by World Circuit veteran Jerry Boys, who also worked on many of Ali’s albums.

Those accompanying Vieux on traditional instruments on Les Racines include Madou Traore on flute, Kandia Fa on ngoni, Souleymane Kane on calabash and Toumani Diabaté’s younger brother Madou Sidiki Diabaté, who plays kora on the title track and on “Lahidou”.
Other guests include Cheick Tidiane Seck on keyboards and Amadou Bagayoko from Amadou & Mariam on guitar, heard respectively on “L’Âme” and “Gabou Ni Tie.”

The ten songs, all original compositions, address a range of topics, traditional and contemporary. “In Mali many people are illiterate and music is the main way of transmitting information and knowledge,” Vieux explains. “My father fought for peace and as artists we have an obligation to educate about the problems facing our country and to rally people and shepherd them towards reason.”

Songs such as “Be Together” and “Tinnondirene” are compassionate calls for understanding and unity. Others such as “Lahidou” which boasts one of the loveliest melodies on the album, address traditional values such as fidelity and loyalty. “Gabou Ni Tie” with its snaking guitar lines, loping rhythm and soulful call-and-response vocals finds Vieux warning against malicious gossip and careless rumours. With its hypnotic groove “Ngala Kaourene” has a classic desert blues style certain to appeal to fans of bands such as Tinariwen. “We use slightly different rhythms but Tuareg and Songhai music have a close connection, like cousins,” Vieux explains.

Family looms large in Vieux’s priorities, too. “Adou” is named after one of his four children and got its title because Vieux began recording it on his son’s birthday while “Flany Konare” with its striking harmonies and chiming guitars is dedicated to a much-loved aunt.

“Returning to the roots of this music is a new departure for me and I’ve never spent so long or worked so hard on an album,” Vieux says. “I knew it had to be deep and durable and powerful and so I took a lot of time to reflect on how to do it and put it together.” The result is an album which would surely make Ali Farka Touré proud that the traditions he represented live on with such renewed vigour and vitality.