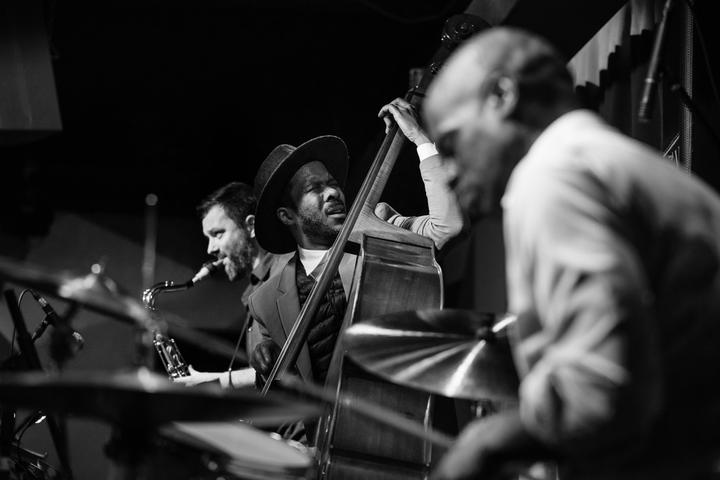 Slovenian tenor saxophonist Jure Pukl follows up his quartet outings Hybrid (Whirlwind Recordings 2017) and Doubtless (Whirlwind Recordings 2018) with an album that signals a clear change of direction. On Broken Circles Pukl swaps his saxophonist wife Melissa Aldana for Joel Ross on vibraphone and adds guitarist Charles Altura for some lyrical comping, on top of a well-versed rhythm section. As a direct result, harmony and flow arise more implicitly, giving Pukl the ideal environment to perform long stretches of melodic arcs.

Widespread progressions with meticulously wrought melodic themes wrapped around are prevalent on an album which doesn't hesitate to vary speed and structure throughout. "Separation" or the aptly titled "Gloomy Sunday" demonstrate a tight rhythm section swaying to a comfortable beat. Like the main melodies, Pukl constructs his solos carefully, emphasizing the important dissonances with a special tone, while Altura, on the other hand, rather slurs through the frets with cozy warmth. His main role on the album, as a matter of fact, consists of subtle comping like colorful brush strokes on canvas—an especially prominent aspect which shines bright on the title track as well as on the opener "Sustained Optimism."

Besides making use of the atmospheric facet of his instrument, Joel Ross also delivers some of the solo highlights on the record; "Compassion" sees the young Chicagoan dropping a tasteful run through the metal bars before he is joined by rare and exquisite soprano sax leads on the album. The elegant playing with which Ross has been able to prominently distinguish himself on his Blue Note debut King Maker (Blue Note 2019) as well as on last year's critically acclaimed Visions(Motema 2019) by Aldana, elevates the interplay of all involved. Pukl shares writing credits with Aldana on the post-bopping tour de force that is the nine-minute long "Triumph of Society." A standout on the album, the track finds all voices alternately soloing, trading crunchy lines with elegant grooves which are intermittently interrupted by composed motifs in unison; apart from "Sustained Optimism," yet another high point for Altura.

A further dynamic layer is gained through the deconstructed conversational piece "Empty Words." An improvisational approach based on dialogues between the players quiets down to a textural bass solo dexterously performed by Matt Brewer and directly segways into the rhythmically driven "Half Past Five." The core of the number consists of an intricate 11/8 combined with hasty melodic riffs and curious harmonic shifts. Apart from Pukl's mesmerizing performance, Brewer and drummer Kweku Sumbry are the stars of this delightful affair.

On Broken Circles, Jure Pukl once again proves to be a smart composer who is able to channel emotional depth through instrumental eloquence. But even beyond his technical skillset, Pukl knows how to pick the right cast of musicians for any endeavor, making this album an especially accomplished one. (Friedrich Kunzmann, allaboutjazz)