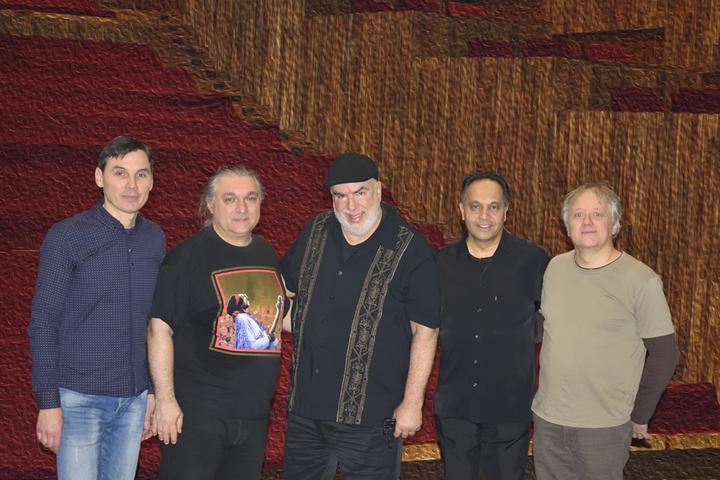 Due to the ministry of social affairs’ decree we have to cancel or postpone announced concerts and to close the box office for the time being. You can reach us by phone from Monday till Thursday between 10 am and 2 pm (01/512 88 11). Tickets for shows that have been cancelled will be refunded, of course. We kindly ask for your understanding that this might take some time. This situation is not an easy one for the non-profit association Porgy & Bess. If you want to support us, you can do so by opting for a voucher instead of a chargeback. Thank you very much!

Guitar player László Halper's latest formation, Halper Quintet published its first CD ‘Blues from Angelland’ in 2019. This CD also features world-famous artists like Randy Brecker (trumpet), Eddie Gomez (double bass) and Angus ’Bangus’ Thomas (bass guitar). Basic line-up of the quintet consists of musicians at the forefront of Hungarian jazz scene: László Halper (guitar), Gábor Kollmann (alto sax), István Fekete (trumpet), Zsolt Kosztyu (bass guitar) and János Sramkó (drums). At this concert the line-up is completed with the band’s guest star Randy Brecker (trumpet) who this year won his 7th Grammy Award, in the Best Improvised Jazz Solo category.
László Halper previously played and recorded too with world-renowned musicians. In 2010 he together with his former group Band of Gypsys Reincarnation, known for performing jazz adaptations of Jimi Hendrix’s compositions, released a CD called ‘40 Years After’ also featuring Randy Brecker. The CD received 4 stars out of 5 from the famous DownBeat Magazine. The same line-up released in 2013 a CD called ‘Electric Angelland’ featuring one of the world’s most renowned rhythm section: Steve Gadd on drums and Eddie Gomez on double bass. The CD material was recorded at the concert giving salute to the memory of Jimi Hendrix, on the occasion of his 70th birthday.