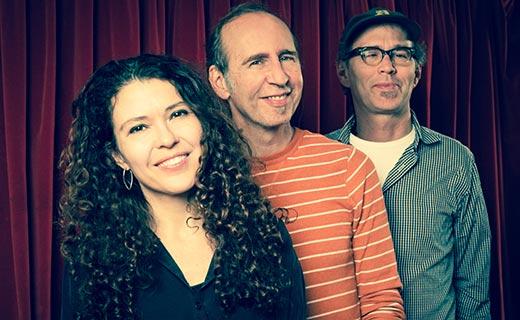 “Some pianists approach the instrument like it’s a cathedral – Sylvie Courvoisier sometimes treats it like a playground,” observes Kevin Whitehead aptly in the liner notes to D’Agala (Intakt), the latest album by the Sylvie Courvoisier Trio. “In two minutes, she covers more ground than some pianists get to in a set.” He goes on to compare the venturesome interaction of this trio with a pioneering jazz icon from the 1950s: “There is something Herbie Nichols-like about the Courvoisier-Gress-Wollesen trio’s feel: collective music-making as light-on-its-feet fun; a genuine trio music in which bass and drums are full partners with piano.” That striking cohesion and collective sense of play are what mark the Swiss pianist and her esteemed American rhythm mates as kindred spirits in the areas of color, groove and melody. The group’s European tour in April-May 2018 celebrates the January release of D’Agala. Courvoisier, who has been a fixture on the New York scene for nearly 20 years, released her first album with Gress and Wollesen in 2014, when Double Windsor (Tzadik) was named Album of the Year by both Slate and New York City Jazz Record, along with receiving the “CHOC” from Jazz Magazine and Jazzman in France. Beyond the trio, Courvoisier earned renown for balancing two distinct worlds – the richly detailed depth of her European chamber-music roots and the grooving, hook-laden sounds of the downtown New York jazz scene. Her long partnership with violinist Mark Feldman – acclaimed on both sides of the Atlantic – has resulted in a seemingly telepathic duo, as well as a quartet. Courvoisier has worked with a who’s who in avant-jazz, including John Zorn, Wadada Leo Smith, Evan Parker, Ikue Mori, Ellery Eskelin, Susie Ibarra, Fred Frith and Mary Halvorson. — Bradley Bambarger