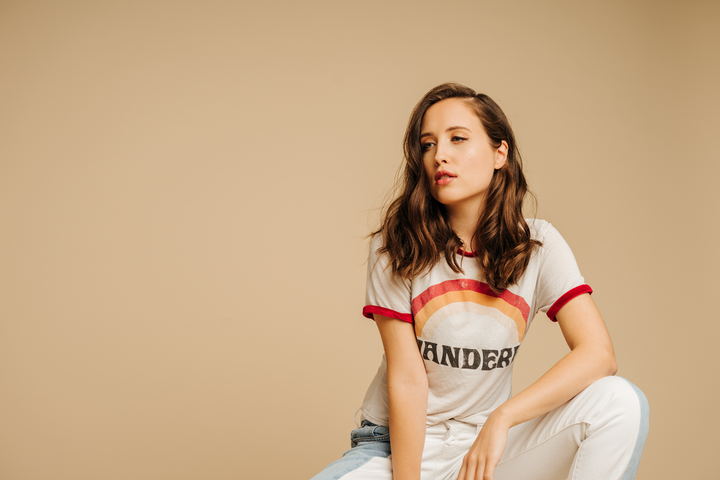 2018: Performing at Jimmy Fallon, New York, Rockefeller Plaza. It’s sheer madness – a German female singer on stage, this doesn’t happen every day. No time to pause and take it all in, Jimmy Fallon just sent an invitation to perform next year – off to the West coast, Los Angeles.

You may as well just stay in L.A., the Coachella booking is currently being negotiated – not in the name of an Instagram influencer or YouTube star, but as an independent artist and song writer. Breathing in, checking your mobile once more, "No Roots" hit over 400 million streams. This is insane. Flight mode on, sleep mask on, exhale. Waking up in Los Angeles tomorrow, Late Night Show with James Corden coming up. 3,000 meters below shines the Mojave Desert.

When Alice Merton wakes up, yet again in a different time zone, flight mode off, the messages are popping in: “This is crazy, I saw you on TV”, “I’m proud of you!”, “When are you coming home?”. Funny. Home. Where family and friends are. Where you are missed right now, but the world has been spinning super-fast for a year or two. It’s where you feel a sting in your chest, you really need to get in touch again. You need to actually be there as you used to. Be the friend who you can always chat to, who is there for you. Difficult one – if you are actually never there. It doesn’t only get better when things finally kick off, the moment most artists wait for and work towards - achieved by only a few. Thus Alice Merton sings on her new single "Easy" about the struggle to combine the fuss that is made about her person on one hand and the normal life on the other hand - an balance act between masterpiece and catastrophe. But the 26-year-old does not need the help of either kitsch or epic to do so, nor a self-pitying ballad, but performs on a beautiful and contemporary indie pop production. She sings about time spent together, mixtapes and memories, but also alienation, distance, division. All the pains that life brings. And says "Sorry", because it's not always easy to be loved and give back to the same extent.

And who would blame the Frankfurt-born - who spent her childhood in the US, Canada and England – for feeling torn. The past three years after the release of her first single, "No Roots," could fill an entire career: The show at Coachella, the US talkshow appearances, being a judge at The Voice of Germany, 7x Platinum, US-Gold, 430 million streams, and the release of their album "MINT" in January 2019. All done independent, everything homemade! As the full-blooded musician and workaholic she is, Alice releases a deluxe version of her first album entitled “MINT +4” including four new songs “PCH”, “Back to Berlin”, “Keeps Me Awake” and, of course “Easy” via Paper Plane Records International on October 18th.This adds further facets and nuances of her artistic personality to the already highly acclaimed debut album. You can only be amazed and look forward to the next highlights and great songs. As you can be sure of it there will be more to come – just as “Easy”! (Anton Wolken)