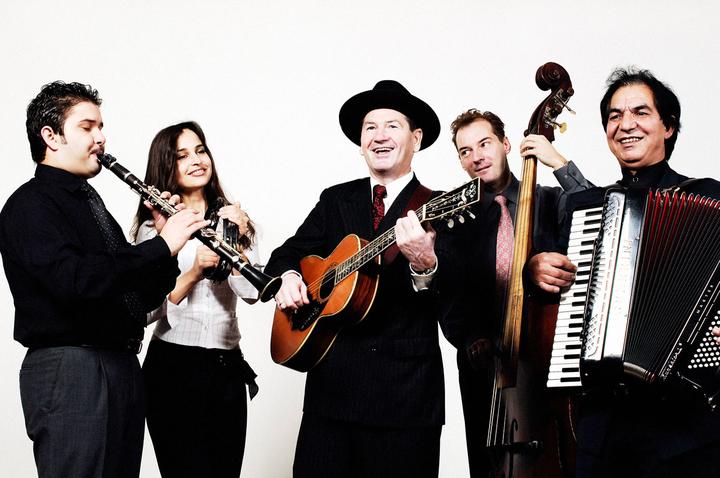 The Wiener Tschuschenkapelle is a renowned Viennese music group, well-known for its musical originality and its lively performances, both in Austria and abroad. The group was founded in 1989 by band leader Slavko Ninić and has been performing ever since.

In the age of so-called “world music” the Wiener Tschuschenkapelle is keen to show the diversity and individuality of multicultural music without degrading it to a boring and superficial crossover. We support a peaceful coming together of all people, a message we carried with us wherever our tours lead us to. We performed in Austria, Germany, Switzerland and the Balkan states, as well as in Brazil, Canada, Zimbabwe and Morocco. In 2016 we had the honor to stage at variant festivals in New York City.

Our repertoire consists of traditional folk songs of the Balkan region, Mediterranean serenades, Turkish-oriental tunes, Greek Rembetiko, Bosnian Sevdalinka, and of course Viennese melodies (after all, the name is Wiener Tschuschenkapelle). Also, we experiment with gypsy jazz and even venture into the realm of classical music – we once had the honor to play with the Vienna Philharmonic Orchestra at the Vienna State Opera. Our live performances feature well-known pieces from our CDs and songs we present for the very first time. The music owes its very special and original charm largely to the “irregularity” of the traditional Balkan rhythms, particularly in 7/8 and 9/8 time.

By now the Tschuschenkapelle produced 13 CDs and one DVD. The fifth CD, “live... und davon”, won the Annual Award of the German Music Critics in the "ethno/world" section. The album “Bosanske sevdalinke” (Bosnian Sevdah Love Songs), released in January 2007, features the Wiener Tschuschenkapelle in cooperation with Jovica Petković, the great accordionist from Sarajevo. The last CD “Donauinselfest live” is a recording from our concert at a huge Viennese festival and was broadcasted live on the radio station Ö1. Every album of our discography is a must-have for experts and admirers of Balkan music. For a taste of our music, check out the listening examples under the button “Diskographie”.

The originality of the arrangements, the virtuosity of the musicians and the charming and entertaining presentation all contribute alike to a delightful evening.

If you are interested in inconspicuous background music seasoned with shallow gags – well, we can’t help you. But if you are looking for something different, we recommend you to try the Wiener Tschuschenkapelle. You will be rewarded with professional and stimulating entertainment and an altogether unforgettable evening.