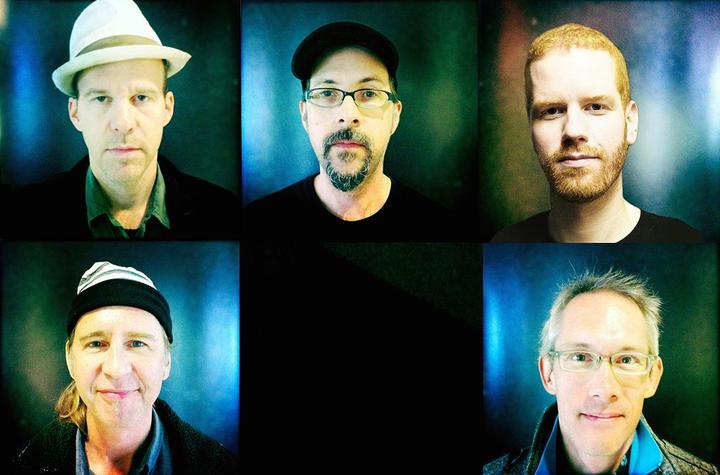 The Claudia Quintet has walked a unique path in contemporary jazz since their founding in the late 1990s. Unlike most jazz ensembles where the particular musicians may come and go, drummer, composer and leader John Hollenbeck always wanted Claudia to be a ‘band’ with a sound not only determined by the compositions and the instrumentation, but with the actual players who perform the music. This concept is why Claudia has had an immediately identifiable sound since its inception. In that sound, the exceptional artistry and individuality of each musician is skillfully revealed throughout Hollenbeck’s original compositions.

Formed by Hollenbeck in 1997, this NYC ensemble’s sound continues to explore the edge without alienating the mainstream, proving that genre-defying music can be for everyone. The Claudia Quintet has amazed audiences from Alabama to the Amazon. Their singular sound has inspired dancing hippie girls at a New Mexico noise festival, the avant-garde cognoscenti in the concert halls of Vienna and Sao Paulo, and a generation of young musicians worldwide. In the course of the thousands of miles they have traveled together and hundreds of concerts they’ve played, the Claudia Quintet has evolved and grown, developing a dynamic live sound based on trust and spontaneity. They bring this powerful energy into the studio, where they record the old-fashioned way, live, playing as a band.

Over the course of 15 years, the group has released eight CDs that are critically acclaimed worldwide and whose appeal extends well beyond, as well as includes, traditional jazz audiences. The group’s first album, “The Claudia Quintet,” was released in 2001 on the Blueshift CRI record label. The group has since established a long time relationship with the Cuneiform label, releasing seven albums with them.

Hollenbeck received a grant in 2009 from the Chamber Music America New Jazz Works: Commissioning and Ensemble Development program to compose a suite that can be heard on their fifth album, Royal Toast. The Claudia Quintet brings together the acclaimed compositional approach of Hollenbeck with two of the most important male singers in improvised music, Kurt Elling and Theo Bleckmann on their sixth album, What Is the Beautiful? The quintet was commissioned by the University of Rochester to set the work of Kenneth Patchen as part of their 100th birthday celebration of the groundbreaking poet. Elling and Bleckmann recite and sing the poems of avant-garde/proto-beat American poet, Patchen, an innovator in his time. Claudia’s latest release, Super Petite, is a potent package that condenses virtuoso playing and a wealth of ideas into ten compact songs.

“With their distinctive merger of old world timbres and futuristic concepts, the Claudia Quintet truly sounds like no other working ensemble today.”
-Troy Collins, One Final Note

“The references span from surf rock to chamber jazz to hyperarticulate “acoustica” club beats, all rendered with exquisite precision and heedless abandon (if that’s even possible).”
-David Adler, JazzTimes

“This is a true ensemble from top to bottom, a sonic equivalent to a hand-woven tapestry…Impressive.”
-Peter Margasak, Downbeat

“They don’t really sound like anyone but themselves…Brilliant.”
-Peter Marsh, bbc.co.uk

“Contemporary classical, jazz, minimal, progressive…genre matters not. The Claudia Quintet is, quite simply, a category all its own—a group of players with the kind of infinite reach to give Hollenbeck’s captivating compositions an approach like no other.”
-John Kelman, All About Jazz