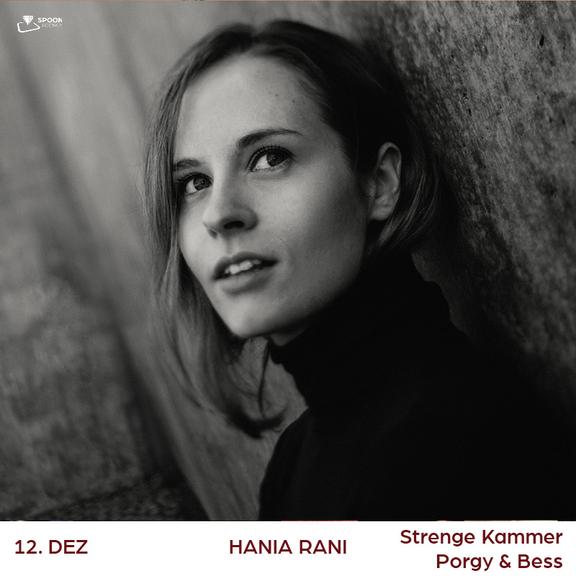 Hania Rani is a pianist, composer and musician who splits her life between Warsaw, where she makes her home, and Berlin where she studied and often works. She has written for strings, piano, voice and electronics and has collaborated with the likes of Christian Löffler, Dobrawa Czocher and Hior Chronik, and released an album with her Polish group tęskno last year. She has performed at some of the most prestigious venues in Europe - from the National Philharmony in Warsaw, to Funkhaus in Berlin, to The Roundhouse in London (where she made her debut at the Gondwana 10th anniversary festival last October) and at festivals such as Open’er, Off Festival and Eurosonic. Her compositions for solo piano were born out of a fascination with the piano as an instrument, and her desire to interpret its sound and harmonic possibilities in their entirety and in her own way.

Esja is her debut solo album and for Rani it is her first, real, personal statement as an artist. “No hiding behind the "collaborations" or "projects" anymore. For the very first time, finally - just me, as I am”.

Recorded at Rani’s apartment in Warsaw (the piano room has a beautiful reverb and the space has become part art studio and part sound laboratory for Rani) and at her friend Bergur Þórisson’s studio in Reykjavik, Esja is a series of beautiful melodic vignettes. Sensual, sensitive, rhythmic, atmospheric, free but harmonious, beguiling and hypnotic, collectively they project a sense of unlimited space and time.

Originally, Rani hadn’t planned to release a solo piano album at all. “I would like to be considered first of all as a composer of music - so not being limited to any instrument or voice or whatever. The solo album came when I went to Reykjavik, where I wrote some new songs instantly while in the studio, so they were almost improvised compositions. It was then that I decided to release an unadorned solo piano album - telling a lot about my musical roots, which are definitely in this instrument. But it’s also just a small prelude of all the music that I want to share in the future”.

Rani grew up in Gdansk with her parents (a doctor and architect) and surrounded by music and films. Initially inspired to study classical music, she was introduced to jazz and electronics at music school, widening her interests and as she puts it, “mixing Chopin & Schostakovitch with Dave Brubeck and Moderat”. Other inspirations include composers such as Max Richter, Esbjorn Svensson, Miles Davis, Nils Frahm, Murcof, Portico Quartet, Radiohead and even The Beatles. “It’s what connects all these artists that inspires me, their special approach to music and sound. For me they have big hearts and huge minds.”

But Rani’s inspirations aren’t just musical, she has drawn inspiration from places she has lived and visited. “It’s about the feeling, the general atmosphere, sometimes about memories. Moving to Berlin (where you have the freedom to be yourself), exploring Iceland and the wild mountains in Bieszczady, South-East Poland, all changed me as a person, so I guess, also affected me as an artist.” And inspiration comes too from visual arts. Her father was an architect and the arts remain hugely important to Rani. “I find that what really inspires my music is not the music, but all the other things. I take inspiration for the form of my own pieces from architecture and design. Then I translate this "foreign" language, to my own music and the outcome is way more interesting for me than just getting it from the music.

Indeed, for Rani it is often an image or a colour that comes first, what she calls a sound image. “I can really feel the colours, the mood - just like with photography. If the image is strong enough, sounds come along very quickly, trying to build the right image stuck in my head. The music fills the space, the music brings the new worlds, new spaces. One such inspiration was the collage artist Anthony Zinonos whose artwork adorns the cover of Esja and whose work Hania first found when she was working on the music that would become this album. “I really like the mix of colours and minimalistic style which perfectly describe me as a person and as an artist. I am really in love with his sense of humour and rare ability to match pure shapes with energetic colours and mood”

Beautifully sculpted, Esja opens with the gorgeous Eden, which features a chorus full of warmth and grace. Sun is inspired by the sensation of the warmth of the sun, but also by the feeling of being small in the face of the universe. Hawaii Oslo takes its name from the film of the same name, but is inspired by the contrast of mood and location, always changing as you listen. Biesy is named for the Bieszczady Mountains and a memory of driving in Bieszczady's forests and twisted roads with friends. The wistful, charming, Luka, is a love song written for someone who affected Rani’s music profoundly. The shimmering Glass is named for its fragility, but also for its many colours, like glass caught in the light. Today it Came is the only song from the album recorded on a grand piano (belonging to Olafur Arnalds in his studio in Reykjavik). Inspired by the piano, Rani wrote a simple, beautiful tune, and when asked what the song was, she replied “it came today" and that became the title of a memorable piece. Finally, Esja is the named by the mountain in south-west Iceland (which can be seen from almost everywhere in Reykjavik) and because of constant changes to the weather there, it always looks different. It therefore became the perfect title for one of her favourite pieces, one that sounds different every time she performs it. And in turn it became the perfect title for her debut album. A powerful, entrancing statement that offers new delights and new insights on every listen and announces Hani Rani as a major new artist.