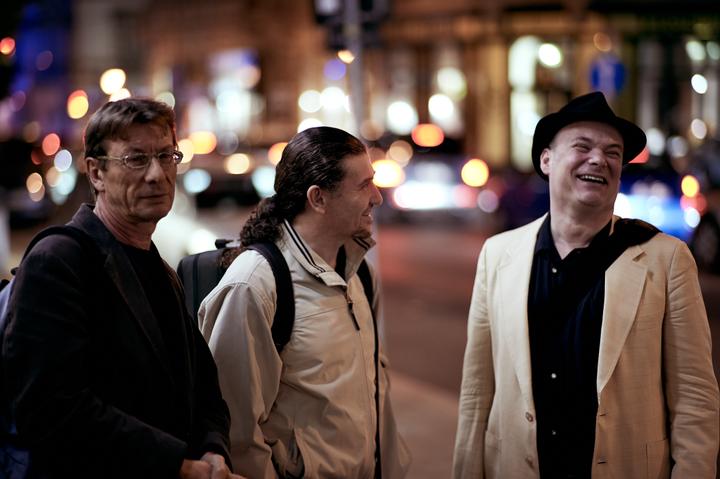 East West Daydreams is one of those recordings that grabs one's attention immediately, only to be quickly and completely overwhelmed by the musicianship, drama and intensity of the music.

The trio of violinist Alexander Balanescu, percussionist Zlatko Kaucic and Javier Girotto on woodwinds have collected five live recordings from a number of years ago in cities all over Europe: Vienna, Austria at the Porgy & Bess Jazz Club (October 8, 2009), Florence, Italy at the Pinocchio Jazz Club (February 23, 2013), Ljubljana, Slovenia at the Cankar Center (February 19, 2013), Triest, Italy at Knulp (April 1, 2010) and Škofja Loka, Slovenia at the Castle Chapel (April 1, 2010). April 1, 2010 must have quite a day.

The performances are spread over two very full discs and range widely stylistically, with the SoundCloud click below giving a good idea of the mix. The venues are not that far away from each other and folk music is always below the surface; it might be called the music's central thread. Its sound is rarely overt, but rather it is infused throughout, even in the most sonic (as opposed to melodic) sections of a performance.

The B.K.G Trio, as they call themselves, is a collection of equals, with Kaucic providing melodic percussion support for the two front line instruments. However, it must be said that Balanescu is such a strong, precise and expressive player that he demands attention whenever he plays. Clearly classically trained, he breaks out into bravura performance of the opening of the Prelude to Partita No.3 BWV 1006 by J.S. Bach (see here by Hillary Hahn for an excellent performance). Perhaps it is Balanescu's style which gives the proceedings a classical feel that merges with that of folk music.

That Balanescu is so strong takes nothing away from Girotto, who stands toe to toe with him in terms of power and intensity. The two soloists also many times combine their separate parts into a unique sound, with Kaucic always adding to the mix. One such section can be spine-chillingly likened to Krzysztof Penderecki's Threnody for the Victims of Hiroshima, but there also many softer, less dense and tender moments throughout.

Not all of the tracks include audience sounds or applause, and the trio produces a unique sound for each venue. Arguably, the highlight of the tracks are the three done in the Castle Chapel, where the large space with its natural echo seemed to produce an ecstatic response from the trio. (Budd Kopman)