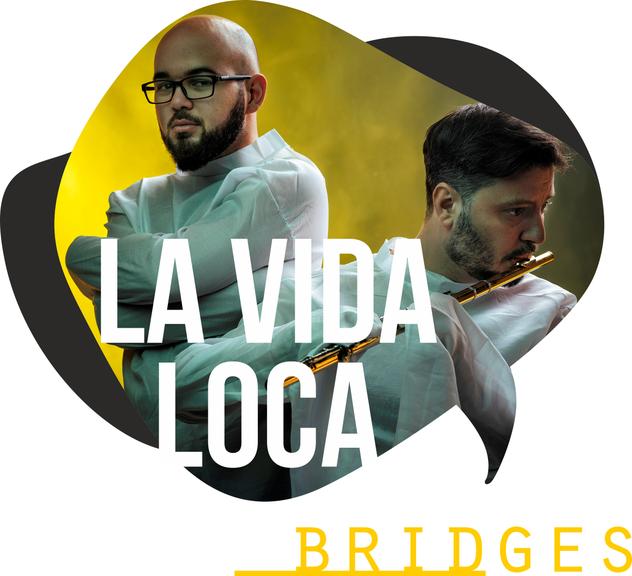 The Romanian virtuoso flutist Matei Ioachimescu and Venezuelan versatile pianist Alfredo Ovalles, both international soloists based in Vienna, will continue the successful project La Vida Loca, with a new edition in 2019, called “Bridges” - the project who sets new impulses and brings new life to the chamber music for flute and piano. Performing modern arrangements of popular and beloved songs from Venezuela, Peru, Argentina, Cuba and Brazil and constantly enriching their repertoire with music from all over the world, these two outstanding musicians are breaking barriers between classical, jazz, rock and contemporary music. For the next edition of this project, among many surprises, they will present an extraordinary piece by Austrian famous composer Beat Furrer and a new composition by young Romanian composer Cristian Lolea, commissioned for this event. Musical stories about the joy of life, forbidden love, celebration of nature, or vibrant nostalgy, are paired with inventiveness and explosive virtuosity in order to make the audience dance in their seats, sing along, and travel to worlds full of colors and passion.

“His playing moved the audience deeply, after each concert there were people in tears and the ovations were unusually long. Matei Ioachimescu is one of the greatest flutists, I have ever heard.” Kalevi Aho (composer)

Matei Ioachimescu, renowned Romanian flutist, has a very intense artistic activity as a soloist or as a member of several chamber music ensembles, being praised for his interpretations of baroque, contemporary music but also for his cross-over recitals. A graduate of the University for Music and Performing Arts in Vienna, his home city by choosing, he won several competitions and grants (Thyl-Dürr or Yehudi Menuhin Foundation) and his collaborations with some of the most interesting musicians from Europe were unanimously appreciated by the audience in concert halls like Konzerthaus Wien, Ateneul Roman, Conservatorio Santa Cecilia, Budapest Music Center or Suntory Hall. His debut CD - "Lumiére", released in 2014 together with pianist Catalina Butcaru, is seen as an album of reference for the two instruments and was highly praised by the critics in Austria and Romania. His intense musical activity and the great quality of his projects brought him the title of « Ambassador of Integration » granted by the Austrian Secretary of the State. Matei Ioachimescu is invited as a member of the jury in several international competitions and has an important pedagogic activity reflected by numerous master-classes and workshops held in Romania, Croatia, Hungary and Austria.

Alfredo Ovalles is one of the most active soloists and chamber musicians from Venezuela. Having performed in places as diverse as Belarus, Germany, Spain, Mexico and the Dominican Republic, he has had the pleasure of playing in halls such as the Berliner Philharmonie, the Wiener Konzerthaus, Wiener Musikverein and London’s King’s Place. A strong advocate for contemporary music, Alfredo is always trying to test the limits of the piano as an instrument and looking to combine it with percussion instruments and expand it with electronic sounds. Due to his never-ending desire for musical experimentation, Alfredo devotes a big part of his time working with composers and performing premieres of pieces written for him or in collaboration with groups like Diaspora Duo, Green Thing Ensemble, and The Black Page Orchestra.