Shake Stew 'The Golden Fang' (A) 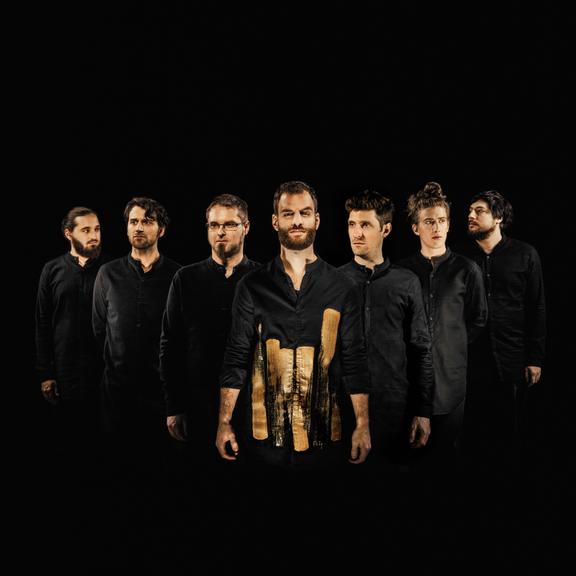 As the youngest musician so far in the history of the Jazzfestival Saalfelden, the double bass player and composer Lukas Kranzelbinder had the honor to play the opening concert in 2016 with his band Shake Stew. Both audience and press were thrilled. Der Standard from Vienna describes the septet’s performance as a „magical opening hour“, to the Kurier Shake Stew sounds „like an intergalactic road movie for the ears.“ The Süddeutsche Zeitung calls the bassist and composer Kranzelbinder a whizz kid and credits him with “an intelligent game of deception with tradition framed by two wonderful alpine gospel songs”. The Oberösterreichische Nachrichten verifies the “concert was celebrated with good reason” and adds: “The 28-year-old writes fantastic pieces, which optimally feature the exciting instrumentation with ist three-part horn section and two basses and drummers. The saxophones of Clemens Salesny and Johannes Schleiermacher sound magnificent and Mario Rom’s trumpet shines. With such up-and-coming talent the Austrian jazz stands on solid ground.”
Shake Stew brings together seven unconventional musicians, all of them interesting characters of the young European jazz scene. They are united with bandleader Kranzelbinder by the pursuit of new, enhanced sound possibilities and by concepts beyond boundaries of genre, which are by now already considered a guarantee with Kranzelbinder. His own distinct combination of virtuosity, entertainment and uncompromising energy comes out in many of his projects and has meanwhile become a kind of trademark of the hard working musician, composer, and arranger. Besides the premiere of his Spanish jazz opera “Muchogusto”, the organization of the Europe-wide music festival “Polyamory Sound Festival”, the conceptual planning of concert hikes at an altitude above 2000 meters under the motto “Almrauschen” [alpine rush] and concert tours from Japan to Mexico, he recently particularly called attention to himself as a band member of Mario Rom’s INTERZONE. In this trio, with trumpeter Mario Rom and drummer Herbert Pirker (both also Shake Stew members), he raises a musical storm true the motto “Everything is allowed”, in which reminiscences of jazz history, blues and bop motifs, rock and funk attitude, virtuosity and humor are swirled together. After consequent reduction in that trio setting, the pendulum now swings in the other direction with Shake Stew. Three soloists and a doubled rhythm section impress deeply, as the Wiener Zeitung describes it: “There are shamanic sound-streaks wafting by, colossal beat architectures banging and energy-drunken horn parts driving wavy lines - a grand sound experience!”
The Golden Fang is Shake Stew’s debut album. It was recorded in one day directly before the opening concert in Saalfelden. Concentration and focus of the musicians characterize this band; in an involved process they prepared themselves for a whole year for their first concert and regard the prominent festival show in Saalfelden as the begin of a long and exciting journey to most different spheres. The Golden Fang consciously brings together a wide-ranging spectrum of musical ideas. The two live tracks from the concert included on the album reflect the starting situation of a band with far-reaching sound possibilities. The mysterious cosmos of tracks like “Stone of Mu”, “Shake The Dust” or “Moon Gong” draws ist inspiration from the works of Thomas Pynchon or Jim Jarmusch, while the pure energy of “Holy Preacher” and “Preaching To The Choir” is strongly characterized by the intensity and the wink of past heroes and shady doctors.
Thomas Pynchon is attested with stylistic virtuosity and extremely high abundance of information and there Shake Stew are in no way inferior to their inspirational source. Non-linearly they knit a dense web of references between various styles, always in search of something, at which absurdity and playful wit fantastically evolve. A promising start and a great pleasure!