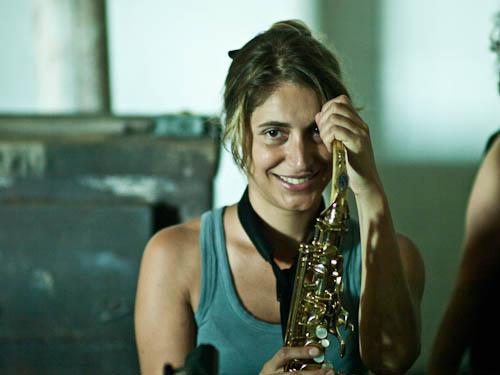 Christine Abdelnour
Born in 1978, Christine lives in France but is of Lebanese origin. After discovering improvised music in 1997 she began a process of self-taught study and sound experimentation using the alto saxophone.

She has developed a unique personal language, producing sounds that are close to those of electroacoustic music but on a purely acoustic instrument. She approaches sound as a malleable material, rich in concrete textures which combine breath, silence and countless acoustic distortions. She has developed extended techniques and complex patterns of sound production, exploring the microtonal aspects of the saxophone and its high-pitched tones. She employs subtle tonguing techniques, unpitched breaths, spittle-flecked growls, biting, slicing notes and breathy echoing sounds from the bell of her horn. Far from any narrative effects, her music addresses the relation between listening and concepts of perception, time and space.

Tomeka Reid
Described as a “New Jazz Power Source” by the New York Times, cellist and composer Tomeka Reid has emerged as one of the most original, versatile, and curious musicians in Chicago’s bustling jazz and improvised music community over the last decade. Her distinctive melodic sensibility, always rooted in a strong sense of groove, has been featured in many distinguished ensembles over the years.

Reid grew up outside of Washington D.C., but her musical career began after moving to Chicago in 2000. Her work with Nicole Mitchell and various Association for the Advancement of Creative Musicians-related groups proved influential. By focusing on developing her craft in countless improvisational contexts, Reid has achieved a stunning musical fluency. She is a Foundation of the Arts (2019) and 3Arts Awardee (2016), and received her doctorate in music from the University of Illinois, Urbana-Champaign in 2017.

Reid released her debut recording as a bandleader in 2015, with the Tomeka Reid Quartet, a vibrant showcase for the cellist’s improvisational acumen as well as her dynamic arrangements and compositional ability. The quartet’s second album, Old New, released in Oct 2019 on Cuneiform Records, has been described as “fresh and transformative--its songs striking out in bold, lyrical directions with plenty of Reid’s singularly elegant yet energetic and sharp-edged bow work.” Another reviewer noted that “while Reid’s compositional and technical gifts transcend jazz, they exemplify the tradition wondrously.”

Jessica Pavone
As both an instrumentalist and composer, Jessica Pavone (b. 1976 Queens, NY) explores music's tactile and sensorial experience as a vibration-based medium. While her earliest training was primarily in classical music, after majoring in viola and graduating from conservatory, she began exploring other avenues for creative musical expression. As noted by Steve Smith in the National Sawdust Log, “Jessica Pavone…has made a career of redefining the possibilities for her instrument.” She is a graduate of The Hartt School of Music. She received a Bachelor’s degree in Music Education in 1998 and earned a Master’s Degree in Music Composition from The Conservatory of Music at Brooklyn College in 2007.

Studying improvisation with Leroy Jenkins from `00-`05, she began harnessing her unique way of incorporating Jazz practices into her viola playing. Since then, Pavone has performed original music by William Parker, Henry Threadgill, Matana Roberts, Aaron Siegel, Tyondai Braxton, Glenn Branca, Matthew Welch, Samantha Boshnack, Elliott Sharp, and Taylor Ho Bynum. From `05 to `12, she toured regularly with Anthony Braxton’s Sextet and 12+1tet, appearing on his discography from that time.

Pavone has produced four albums of solo viola music, all of which present indeterminate pieces that stem from years of concentrated long tone practice and an interest in repetition, song form, and sympathetic vibration. In 2017, she created the J. Pavone String Ensemble as an outgrowth of her solo viola language. The ensemble approach focuses on a vision of collective improvisation that prioritizes a collaboratively sewn musical fabric, in contrast to the traditional improvisatory approach that prizes the showmanship of the soloist. The group has performed at; Black Mountain College in Asheville, the NYC Winter Jazzfest, Firehouse12 in New Haven, Roulette and ISSUE Project Room in Brooklyn, and the Garner Arts Center in Garnerville, NY. Three studio albums have been released to critical acclaim from The Wire, The New Yorker, Pitchfork, and the San Francisco Classical Voice. Chris Ingalls from Pop Matters described the music as "too stunning to lump into genres."

Pavone has been a composer in residence at the Ragdale Foundation (Traeger Fellow), the Ucross Foundation, Soaring Gardens, and Mise-En_Place; and has received grants from the Foundation for Contemporary Arts (2021), Queens Council on the Arts (2020), New Music USA (2015), the Tri-Centric Foundation (2015), Experiments in Opera (2013), the Jerome Foundation (2011), and MATA Interval (2007). Her works have premiered in NYC venues including Roulette, the DiMenna Center, the Noguchi Museum, ISSUE Project Room, Abrons Art Center, the Museum of Art and Design, and The Kitchen. Her albums have been produced by Tzadik, Taiga Records, Thirsty Ear, Astral Spirits, and Relative Pitch, including four collaborative duo recordings with guitarist Mary Halvorson. In 2011, Pavone was featured in NPR’s "The Mix: 100 Composers Under 40." Brad Cohen of Jazz Times described her as "a freethinker who can’t be pigeonholed," and the New York Times wrote that her music is "distinct and beguiling…its core is steely, and its execution clear."