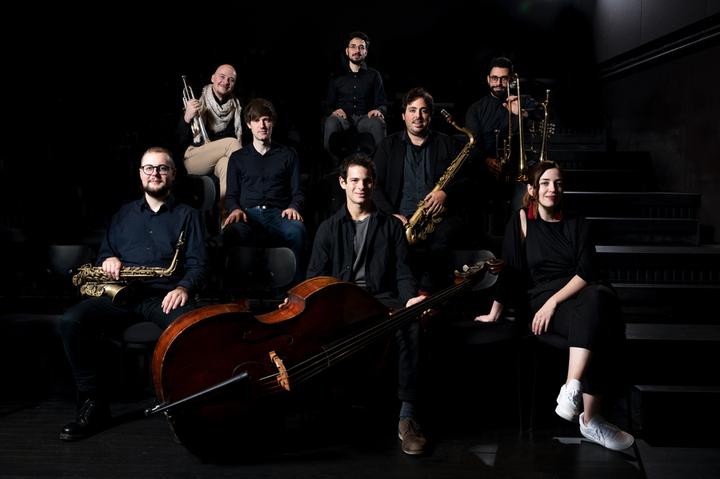 THE FOCUSYEAR BAND 21 is a truly international ensemble of accomplished jazz musicians. Chosen yearly out of around 150 international applications, it did not take long for this year’s Focusyear Band to develop its own sound. The octet offers a highly developed musical language and risk-taking improvisations. After many intensive weeks of being coached by world-renowned jazz masters, the young members present their own compositions, newly written for this ensemble. These can be heard on their upcoming album, recorded in January 2021. Vocalist Tatiana Nova grew up in Moscow and came to Dresden at the age of 19. Alto saxophonist Joshua Schofield hails from England, and tenor saxophonist Gianni Gagliardi from Spain. Ukrainian Yakiv Tsvietinskyi and Argentinian Sebastián Greschuk both play trumpet and flugelhorn, as well as valve trombone. Pianist Lorenzo Vitolo is from Naples, Italy, and studied in Groningen, Netherlands. Bassist Ethan Cohn is a New Yorker and studied in Montreal – and Hungarian Áron Tálas is both a drummer and a pianist.

If nothing else, the Focusyear Band 21’s Bosque represents assurance that the future of jazz is in good hands. But it’s a lot more than that; it’s an hour of good music, for one thing. It’s 10 original compositions created and played by eight young musicians from around the world called Focusyear Band 21. It’s the 2020-21 crop of students chosen to spend the better part of a year (the “Focusyear”) at the Basel Music Academy in Switzerland. The student musicians are coached regularly by some of the top jazz creators in the world, put on concerts in the community and – in a normal year – go on tour. And they make a record in the program’s own studio.

All of this music has a real international feel, not falling too closely to the blues or American bop. The wordless vocals that Tatjana Nova contributes to most tracks give it a Brazilian/Latin feel at times, not surprising with the presence of Luciana Souza on the panel of mentors. But overall it’s just recognizably large-group jazz, much of it with a European feel to it.

A lot of the credit for this ensemble’s cohesiveness goes to the rhythm section of Áron Tálas on drums, Ethan Cohn on bass and Lorenzo Vitolo on piano. The three of them make a tight trio throughout, and especially on the driving title track. Ditto the opener “Bonfire,” a five-minute stab of fusion-y post-bop. A lot of these compositions hang together really well, with composed sections where several of the musicians play the complex melodies together, interspersed with some adventurous improvisation. Some notable places where that occurs are in the orchestrally forceful “Crash Landing” (trumpet and alto in particular); “Ladina Oswald,” with a killer sax workout, followed by a mesmerizing flugelhorn solo; and “Mean Street,” with a three-part complex counterpoint section on alto, tenor and trumpet plus some impressive vibes from ninth member Jorge Rossy.

I listen to a lot of Nordic jazz, so I was curious to check out the track called “The Nordic Shuffle.” It’s a clever take on the genre. After an intro with an avant garde feel to it, full of fluttering pads, breathy exhalations through brass horns, and squeaking mouthpieces, it launches into a vaguely Arabesque melody led by one of the trumpeters, with Nova singing along wordlessly in lockstep; she then has a nice improvised section of vocal gymnastics sandwiched between instrumental solos. Another real highlight is the upbeat final track, a song “Joy” by Nova. Its arrangement perfectly captures a youthful sense of life and expanding possibilities.