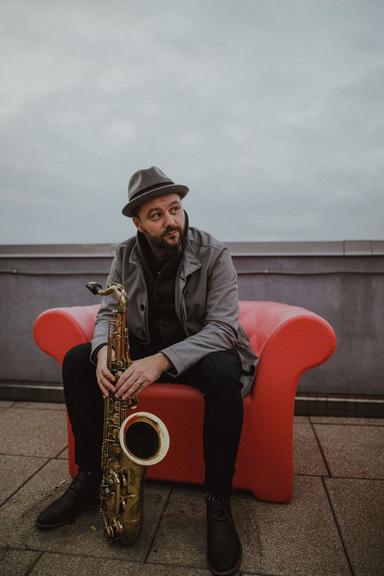 On tenor saxophone, Jure Pukl possesses a sleek tone with which he sculpts alluring melodies, accentuated by coruscating passages. When he talks about his music or about life in his home country of Slovenia, the allure is similar; he draws you in immediately with his ebullient cadence.

Pukl’s latest disc, Broken Circles (Whirlwind)—featuring vibraphonist Joel Ross, bassist Matt Brewer, drummer Kweku Sumbry, and guitarist Charles Altura—isn’t quite so bubbly. It’s a call to arms for people worldwide to treat each other with greater respect. “I’m very involved with the political and social state the world’s in,” the 42-year-old Pukl explains on a late September afternoon as he sits in the spacious Harlem apartment he shares with his wife, fellow saxophonist Melissa Aldana.

The impetus behind Broken Circles is, in two words, compassion fatigue. “We’ve become numb to a lot of things that are happening,” Pukl says. “‘Oh well, another black person got killed by a white police officer.’ We post these incidents on social media, then pray and send positive thoughts. But it’s almost too late for just praying.”

Pukl recalls being horrified watching the Trump administration separate children from their parents seeking political asylum at the U.S.-Mexican border. “I was very emotionally affected by that even though I don’t know any of the families directly involved,” Pukl says. “While I was watching it on the news, I sat at the piano and started playing this melancholy melody”—which became “Separation” on the new album.

For sure, Broken Circles doesn’t center only on life’s hardships. Tunes like the glowing ballad “Compassion,” the joyous “Sky Is the Limit (for Damir),” and the sensationally swinging “Triumph of Society” juxtapose the somber with the sanguine. (The first two also display Pukl’s mastery of the soprano saxophone.) Then there’s the beautiful “Kids,” which kicks off with children singing “The Alphabet Song” before giving way to a sterling tenor melody and a leisurely improvisation.

“I am an optimist,” Pukl asserts. “Although I sometimes think everything sucks, I still believe that times will get better.”

Pukl’s optimism played a tremendous role in taking him from his hometown of Velenje to New York, where he now plays with some of the world’s top jazz musicians, including Vijay Iyer, Esperanza Spalding, Jeff “Tain” Watts, and of course his wife. His commitment to music came slowly, though. He started out playing European classical music, first on the recorder (at eight), then the clarinet, but his heart wasn’t in it. “I wanted to be a rock guitarist,” he recalls. “I was a skateboarder and I was training in Alpine skiing. So after two or three years of studying the clarinet, it became a burden.”

As a teenager, Pukl formed a garage band; that motivated him to take up alto saxophone. Later, in 1995, his music teacher Oto Vrhovnik pushed him to practice at least five hours a day. Eventually Pukl followed Vrhovnik to Vienna to continue studying classical music. He also played in a funk band there, and got his first whiff of live jazz, seeing Kenny Garrett, Dewey Redman, Herbie Hancock, and Wayne Shorter. Next he discovered Charlie Parker, by accident. His father was traveling to Germany and Pukl asked him to bring back some Maceo Parker recordings; instead, his father unwittingly returned with Bird albums. “I listened to that bebop and said, ‘What the fuck is this?’ The music had no groove. I was wondering where the backbeat was. But two weeks later, I couldn’t pull it out of the disc player.”

Jazz’s magnetism eventually led Pukl to Berklee College of Music in 2002. It was a shock. “I just had information,” he says. “I didn’t have experience. My musical ego had already developed because of classical music. But when I came to Berklee, it was all zero. I was afraid and insecure.” The pressures of his one-year stay incited panic attacks, and he returned to Europe, where he kept studying and performing.

But the pull of the U.S. jazz scene, particularly New York, stayed strong; in 2013, Pukl made his official move to Gotham. “It was just a need,” he explains. “I didn’t have gigs. So what do you do? Find your own gigs. I always knew how to find my way through life. I had to, because I came from Slovenia without knowing anyone.”

Now that Pukl’s better established, he’s transferring some of his hard-won good fortunes to others. For the past five years, he’s been hosting Creative Jazz Clinic Velenje, a late-winter weeklong jazz workshop in his hometown. “We have 60 to 200 people attending each time we have the concerts after the workshops, which for a small town is not bad,” Pukl says. “I’m trying to both develop a jazz audience and impart some of the wisdom I’ve learned to aspiring musicians. If we really want change, we need to start with ourselves in our own homes.”