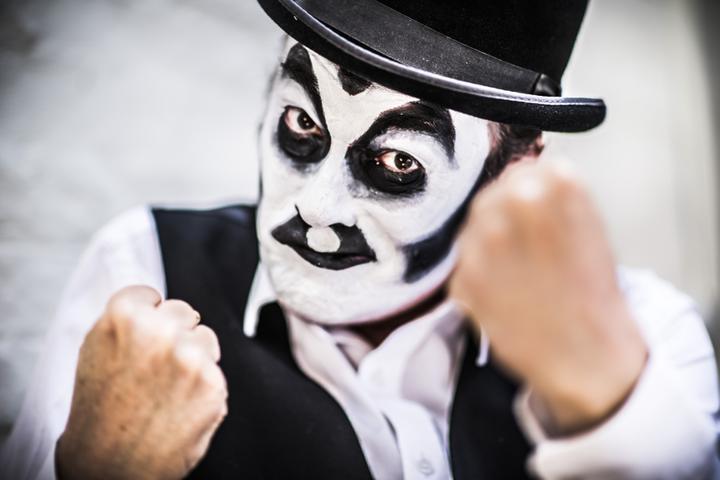 “This delicious dark cabaret is Kurt Weill as scripted by Aleister Crowley, and the execution is impeccable throughout. Phenomenal.“
***** The Guardian

“A remarkable performance, one which confounds their reputation as theatrical ironists and confirms that behind the greasepaint lurks genuine emotion.“
***** The Independent

With their signature blend of chanson, opera, and Gypsy music, London-based experimental rock trio the Tiger Lillies are difficult to define in one sentence. The group began its revels in the bawdy vaudeville traditions of prostitution, opium dens, and the seedy life of the eternal street musician in 1989, when singer Martyn Jacques placed an ad for a drummer and bass player. His only responses were from Adrian Huge and Phil Butcher, respectively, who completed the band's original lineup. This version of the Tiger Lillies issued their first recordings on cassettes (which were later gathered on the compilation Bouquet of Vegetables: The Early Years) and 1994's Births, Marriages and Deaths before bassist Adrian Stout replaced Butcher in 1995.
The band was prolific during the '90s, issuing albums including Spit Bucket (1995), The Brothel to the Cemetery (1996), and Farmyard Filth (1997) before contributing music to Shockheaded Peter, a gleefully macabre musical theater adaptation of a 19th century German book of cautionary tales for children, in 1998. The production spawned a Tiger Lillies album of the same name that year and won two Olivier Awards in 2002. In 2003, the trio worked with the Kronos Quartet and illustrator/writer Edward Gorey on another career highlight, The Gorey End. Inspired by a box of unpublished stories and drawings that Gorey sent the band, the album was released shortly after his death and was nominated for a Grammy Award for Best Classical Crossover Album. Over the years, the Tiger Lillies interpreted well-known works including Punch and Judy (2004), The Little Matchgirl (2006), The Rime of the Ancient Mariner and Hamlet (both 2012), and collaborated with artists ranging from the Symphony Orchestra of Norrlandsoperan (on 2007's Urine Palace) to photographer Nan Goldin (on 2011's The Ballad of Sexual Dependency).
Huge left the group in 2012, with touring drummer Mike Pickering taking his place until 2015, when Jonas Golland joined the fold. As the 2010s continued, the group's range of influences expanded. Along with more expected fare like 2014's Lulu: A Murder Ballad, which took inspiration from 19th German playwright Frank Wedekind's daring series of plays about his ill-fated heroine Lulu, the trio also tackled subjects such as World War I (A Dream Turns Sour) and the work of Søren Kierkegaard (Either Or). Later in the decade, the trio explored more modern sources of inspiration. In 2016, they released the Cole Porter homage Love for Sale and Goosebumps Alive, which celebrated R.L. Stine's cult favorite books in song. Early in 2017, A Cold Night in Soho took a gritty, poignant look back at Jacques' time in '80s Soho. ~ James Christopher Monger, Rovi