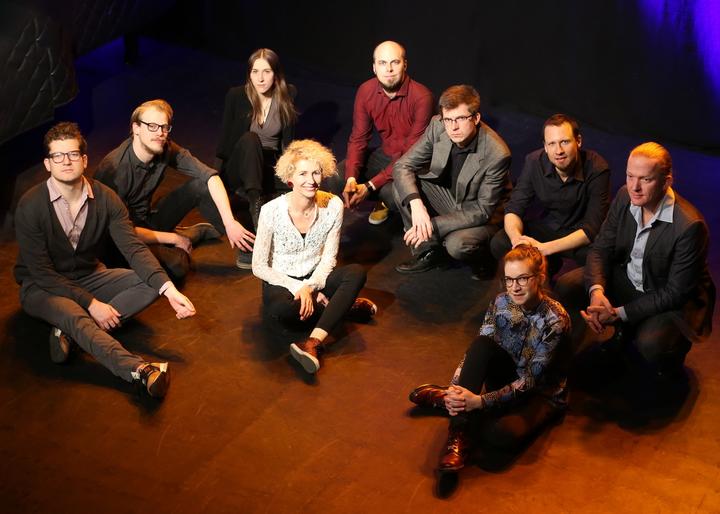 [...] “Gina Schwarz has formed a democratically functioning collective of handpicked exceptional musicians; each with a unique and unmistakable voice. Particularly fascinating is the experience of hearing how unconventional art can sound so free-spirited and yet pleasing to the common listening.” (Hannes Schweiger)

"Pannonica de Koenigswarter, born Kathleen Annie Pannonica Rothschild, was one of the most important promoters of Modern Jazz”, according to the entry in Wikipedia. Kathleen was closely connected to Thelonious Monk as well as to his family, and in return for her selfless support as benefactress he dedicated several compositions to her. “Pannonica” - arguably one of Monk’s most known works - is also the namesake of this fascinating project by the “Baroness of the low notes and deep sounds”, Gina Schwarz. Gina pays tribute to the patronage of Kathleen Rothschild and at the same time opens up a conscious female “sight for listening“. Gina Schwarz’s new excellently cast formation pannonica started as a stage band at Porgy & Bess Jazz club in Vienna during the 2017/18 Season. A profile of this work is captured on this double CD: CD 1 “Musicbox“, and the newly arranged material on CD 2 “Free Landscape”. Gina Schwarz acts as a prudent but sovereign bandleader, and is known to be a gifted and fascinating bass player, as well as a composer and an arranger. Her music leaves a lot of room for interpretation, which creates a fascinating interplay, exciting solos, as well as an eversurprising flow of ideas for co-musicians and listeners alike. The project invited international female composers and musicians as special guests, who performed their task exceptionally on eight highly variable and exciting evenings. Gina Schwarz has been a bandleader of formations like “Schwarzmarkt” or “Jazzista”, as well as coordinating projects like “Union”, featuring Jim Black. Over time she has become a highly productive catalyst of the present Austrian jazz scene. This recording is a sustainable proof thereof. The Baroness de Koenigswarter died in1988. A book titled “The Jazz Musician and her three wishes” was published posthumously. I highly recommend it! To quote Duke Ellington: “My wishes are very modest - I want nothing but the best”. With pannonica, Gina Schwarz comes very close to Ellington’s paradigm. Chapeau!
(Christoph Huber, Porgy & Bess, Vienna, November 2019)

Liner Notes – Special Guests
“I loved playing with pannonica in 2018, initiated by Gina. What a fine bandleader, composer and bassist she is! I am impressed by the special instrumentation and their approach to playing - everyone is going all in for the music with real openness.” Marilyn Mazur

“Gina and pannonica provide a landscape of beautiful and intricate listening adventures. They take our ears on a luscious adventure through open, pastoral moments, morphing organically into wonderful solo moments, all orchestrated and supported by Gina’s wonderful writing. An album that will inspire hours of listening and enjoyment for sure!” Ingrid Jensen

“With this ensemble Gina has created a very diverse and thus super inspiring pool of creativity. It was a tremendous pleasure to dive into her original music with those awesome musicians.” Angelika Niescier

“Gina Schwarz's pannonica creates sonic landscapes, which are full of beautifully crafted musical intricacies and a clear and bold emotional connection to each note. Being part was an experience that greatly enriched me as a musician.” Camila Meza

“Being invited to play with pannonica is like receiving a nice gift. The musicians involved in this project take amazingly good care of your music and refine it! The best present a composer/songwriter could ask for! What a beautiful and genius concept initiated by Gina Schwarz. Pannonica creates so many new musical universes, which wouldn’t have existed otherwise ... connecting musicians all over!” Karin Hammar

“It was so much fun and an honor to be part of Gina’s pannonica with all these wonderful musicians! She is an experienced leader, great musician and composer and full of energy and fresh ideas. We need more of these special moments where everybody is opening up to create something new and inspiring. Thanks Gina!” Julia Hülsmann